These old magazine ads were sent to me about four years ago by one of this blog’s most active visitors, Mark Winchester.

I donâ€™t see a date on them but there are a couple of clues.

– The ad copy refers it astronauts so Iâ€™m guessing itâ€™s in the era of the Mercury program which ran from 1959 to 1963.
– The mailing address for the company in New York does not have a ZIP code. That system started in 1963. While individuals might not have adopted ZIP codes immediately, itâ€™s likely a mail order company would have.

Thatâ€™s nearly 60 years ago. And the ad copy references research done in Germany in the 1920â€™s which is knocking on 100 years ago.

And no doubt, some Neanderthal 50,000 years ago tried for years to roll an inconvenient boulder away from his cave without budging it an inch while getting progressively stronger every year. But thatâ€™s just a wild guess on my part. He might not have been Neanderthal. Hehe. 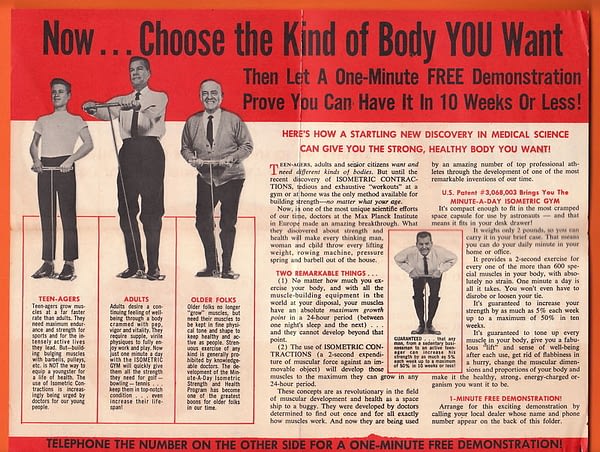 There are some interesting takeaways from this:

– They prescribe a 2-second static hold. That will work. Iâ€™m sure less than one second will work. For years Iâ€™ve been telling people to use 5-seconds but that mainly because I donâ€™t want to encourage cheating or bad form. The shorter the time, the more likely a person is to jerk the weight or throw his entire body into the movement and use extra muscle groups other than the target.

– They claim â€œolder folksâ€ no longer grown muscles. Thatâ€™s absurd. I work with people who are 70+ and have objective lean/bodyfat measurements that prove theyâ€™ve gained significant mass.

– Although it doesnâ€™t get into details, the reference to Max Planck Institute involved experiments with frogs. In 1925 Petow & Siebert tied a frog’s leg so it was immobilized. The frog was fed and otherwise healthy but frequently attempted to pull its leg free. At the conclusion of the experiment the restrained leg was bigger and had increased muscle mass compared to the free leg.

– The ad claims that there is a finite maximum amount of muscle you can gain in 24 hours. That’s surely true, it’s certainly not infinite. But it says the 2-second contraction triggers that maximum. I’d love that to be true, but it ain’t easy to prove with clinical certainty. There is zero doubt that muscle growth is triggered – but the absolute maximum?

– It says it provides exercise for “more than 600 special muscles” which is hilarious. There are 40 muscles in your face, eight in your tongue and I don’t even want to get into valves and sphincters. Pretty sure this device is missing a few required exercises.

– Claiming a 50% increase in strength in 10 weeks is actually pretty realistic. In fact, it’s on the low side for most people. The big problem would be how to measure that exact increase with this device.

That last point is the downfall of many of these training methods and gadgets. How do you acquire objective data?

Are you pulling on that rope 50% harder than last month? Or is it 23%? Or could it be -9% but it feels harder because you’re tired, stressed, or still digesting a meal?

And why are your biceps 30% stronger but your triceps are only 12% stronger? What tweaks are required for you to achieve better gains?

I like seeing these early efforts to push the boundaries of strength training, but it’s pretty clear the future belongs to individual metrics from individual trainees – all measured to a decimal place.