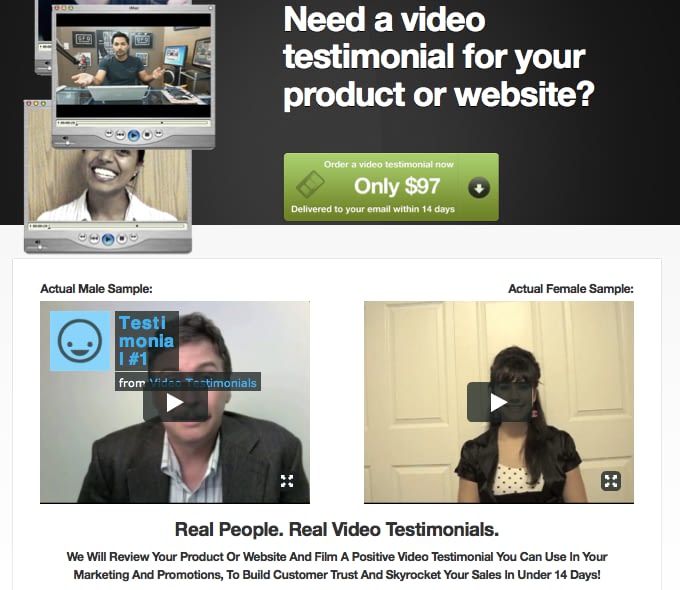 We’ll say anything for money!

â€œForewarned, forearmed; to be prepared is half the victory.â€ Miguel de Cervantes

I’m liking this new blog format. It has an immediacy to it and also allows for your feedback and for interaction between us. It makes it a lot easier for me to inform people of little things here and there that might not have been worth the effort to create a broadcast e-mail and to interrupt your day with. This seems less invasive all around.

So here’s a tidbit. You probably already know how much I dislike the dishonesty swirling around (not to say up to the neck of) the fitness industry. I’ve written about the rampant use of fake photos and fake blogs to promote consumer products. Well here’s the latest weapon from the Dark Side. As much as I hate to give any publicity to these guys, I’m operating under the theory that to be forewarned is to be forearmed.

This company will provide anybody with a positive video testimonial for whatever they are selling. And you can give them a script telling them what specific accolades you want them to include. I was going to pay them to say “Pete Sisco is the greatest guy in the world and his Static Contraction method allowed me to gain over 100 lbs of pure muscle in one week.” But to be honest, I worried that the video would surface 10 years from now – completely out of context – and people would think I was trying to dishonestly promote myself.

Plus I can’t bear to send them a dime.

So you’ll just have to imagine these guys saying outrageously positive and truly fantastic things about me and everything I do. Because I’m sure that for $97 bucks they would. Note also how they have and “Actual Male Sample” and an “Actual Female Sample” so it’s good to know those models are actually male – and actually female. I guess that’s for the benefit of prospective clients who normally doubt a person’s gender. The company is based in Australia and I’m wondering if that’s because prostitution is legal there. Because when you think about it, that’s really what this is.

My point in telling you is that you can now expect to see a rash of video testimonials online for every sleazy thing under the sun and now you’ll know enough to be very suspicious. If you don’t know that already.

: before & after
Previous Post Five Predictions for the Next Decade of Strength Training Next Post Proper Flexibility Training Means Using No Weights – Not Heavy Weights

What was the exercise that is useful for building endurance+strength (for MMA fighters), please? Thanks alot.

MMA fighters are the same as all other humans so there would be no special method for them to build muscle endurance than there would for anyone else. So I’m not sure I understand your question. What are you doing now and are you using SCT?

Wow that is absolutely amazing Pete.Not only are they liars without scruples at all but really cheap as well.I think anyone having these people behind them can have confidence that they are really going places with their product or services.Let me say again these people amaze me.Dont countries have laws against this sort of thing?