Anybody can claim his routine is a “high intensity” H.I.T. routine as long as he never takes an objective measurement of that intensity.

And especially if he uses “effort” as his scale. People are always very generous with themselves when they calculate the percentage of effort. “Oh, man, I really gave that 100%! That was intense!”

Was your effort 8% more intense than last Thursday when you did the same exercise? Or 3% less intense?

I heard a funny story from one of my customers this week. I’ll call him Tom.

Tom shows up at the gym on the busiest day he’s seen all year. So he has to wait for a power rack to come available.

Two racks near him are being used by guys aged 20-something to do 95 lb and 135 lb squats. One of them asks Tom if he’d like to join in and do a set.

The thing is, Tom is ten years older than these guys but he’s doing a special routine of mine that involves strongest-range partials done in a unique compound way. And he uses waaaayyyyy more weight than these younger guys use.

Tom told me he didn’t want to mention any of that and end up “starting a fight with bro scientists.” 🤣 🤣

So he told them he was doing a research project and needed exact numbers and time.

Then he had to wait a long time to work alone.

The ‘lightest’ weight Tom uses is 350 lbs, the heaviest is four digits. He does three special exercises that last one minute each.

In those three minutes Tom hoisted a total weight of:

How “high” was his High Intensity Training? How about 36 Chevy Malibu’s PER MINUTE for three minutes of effort?

And next time it better be 37 cars per minute or it will mean he isn’t fully recovered and making progress.

This was his 14th workout and his “light exercise” Power Factor graph of lbs/min looks like this: 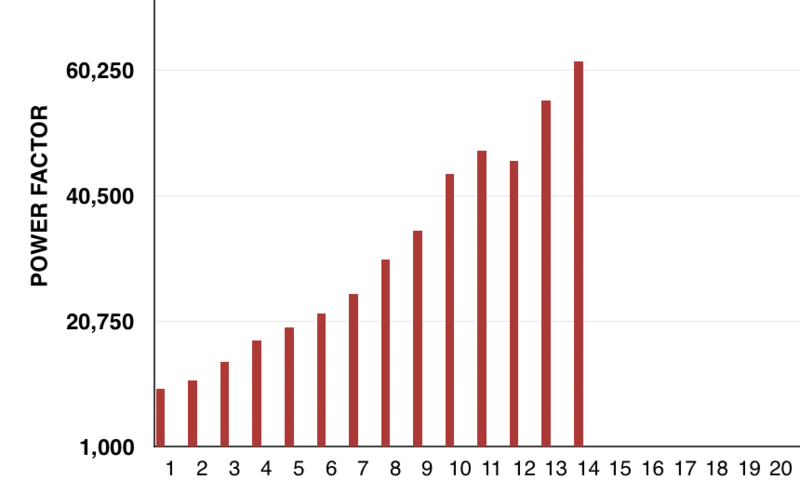 I’m sure those younger guys all patted themselves on the back for their 100% effort and their high intensity workouts doing a dozen or so squats with 95 and 135 lbs.

But those poor saps have no idea what they are really capable of because they’ve believed the common training lies so long they now defend them with conviction.

Hi Pete, – in this example the young fellas squatting 95 and 135 respectively are no where near their potential {normal ROM, dynamic movements}, Do you think newbies like this should spend a year of so training full/regular/normal range, before graduating to PFT/SCT protocols.

It comes down to their priorities. If they have some reason for needing maximum full range strength then there’s only one way to get it. Just like needing to throw a baseball fast – you’ll have to practice that exact movement thousands of times.

But if they just want to add 20-30lbs of muscle to their body they are doing it a very, very inefficient way. When mass is the priority I don’t see a good reason to risk the weak-range injuries and slow down progress by avoiding maximum intensity for years.

What happened to the mega thread talking about the Healthlift, deadlift, ect?

The author of that article was criticized for his remarks so he asked for his article to be taken down. I obliged him.

Pete,
I definitely hit a plateau in my PFT routine. I know your Engineering Strength Gym works for beginners and mid-level. But how well does it work for folks who have been training consistently for 4 years or so with steady but much slower progress. I might be mistaken, but I believe you charge folks on a monthly basis for your services, that is a distinct disadvantage to folks that train less than once a month. If your ESG membership charged the customer on a per workout basis, it would be far more beneficial for more advanced folks to join your service. Thank you very much.

Hi Ralph. Everybody hits plateaus but it’s almost always possible to break past them with a tweak in weight/reps/time/or frequency.

This would be the program for you: 10 workouts with no time limit on how long they take to complete.
http://www.precisiontraining.com/engineered-strength-gym-3/

No comments to display