A few years ago weÂ conducted a static contraction training study using eight middle-aged golfers. We wanted to determine how little exercise could not only result in increased strength but also how it would transfer to athletic performance. We chose golf because swinging a club uses a very exaggerated range of motion and our abbreviated Static Contraction workout used no range of motion. That right, no movement exercise to see if it would improve a full-range sport like golf.

The subjects were given a workout that consisted of six exercises performed on one day and six different exercises done on a different workout day. Each exercise involved a 10 to 20-second static hold. A weight was lifted into position (sometimes with assistance) and then held statically without locking out. This was back in the days when we still thought a person needed to hold the weight 10 to 20 seconds. Now we know that is not only not necessary, it also means using a much lighter weight.

Measurements of their strength in twelve muscle groups were compared for a before and after calculation of improvement. The results of their fourteen minutes of exercise over six weeks were as follows:

Compare the above results with a conventional training protocol. Most people do at least two exercises per muscle group, perform three sets and perhaps 12 or 15 reps per set. Allowing just five seconds per rep this makes for at least 36 minutes of exercise per workout. This is usually done three times per week. So, in six weeks a conventional program would involve 648 minutes of exercise. Thatâ€™s 42 times more work than the subjects on our study! But are conventional resultsÂ 42 times better? How could they be? Look at those improvement numbers again. When was the last time you had 6 weeks even equal to that, never mind surpassing it?

Every one of them showed an improvement. The increase in drive distance varied from 5 to 31 yards! Keep in mind that these subjects had been golfing for up to forty years and had handicaps as low as eleven. So getting any improvement in golfers who already play at this level is impressive. Getting it with 14 minutes of exercise spread over six weeks is truly revolutionary.

The fact is every sport â€“ even a finesse sport like golf â€“ is improved by an increase in strength. Muscles are responsible for all movement in the body and stronger muscles will deliver more power to every aspect of movement, irrespective of its range of motion.

Since this study weâ€™ve gone on to improve static contraction training. Further research showed that static hold times could be reduced to even less than what the golfers used. Workouts can be spaced farther apart as a trainee gets stronger. I work with advanced trainees who train once every six weeks, yet they gain in strength on every exercise each time they work out. The weights they hoist are enormous.

We believe the time is coming when most people will have a better understanding of the role of proper, efficient strength training methods and frequency. For the person who wants maximum results with minimum time invested, an ultra-brief but ultra-intense workout will be performed about as often as they get a haircut. Anything more is just lifting weights as a busy-work hobby. 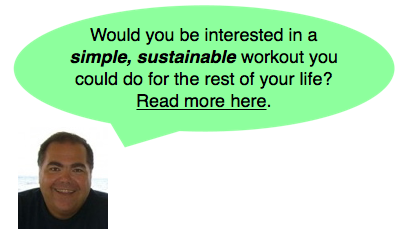